Its been 25 years since Alfa Omega TV began distributing programs to regional and local television stations. This one of the oldest projects and it started in 1994, even before the channel came into existence.

25 years ago, Alfa Omega TV started off as a subtitle and translation studio, thus becoming content provider. 25 years ago we tried to share these programs with others, we had to use them some way or another. We tried to distribute programs due to our desire to play a role in educating the viewers.

I remember that in 1989, in Timisoara, in Opera Square, people were saying The Lords Prayer standing on their knees, and everywhere you could here voices saying There is a God !. We, the Alfa Omega team, want this to happen not only once in a while, but we wish people would have the certainty that God exists.

In 2006, when our TV channel was launched, we decided that our purpose, as being the first Christian TV channel in Romania, is to evangelize through mass-media.

If in the beginning there were only 5 to 10 collaborators, their number has now increased to roughly 40 regional and local stations.

First of all, I want to thank you for the long-lasting collaboration of almost 25 years, during which our TV station broadcasted programs, movies, documentaries and cartoons, all watched by our viewers with great interest. 25 years is a long time when we talk about a companys life and it says a lot about that organization. It indicates high levels of professionalism, involvement, dedication, very much work and commitment.

Our collaboration started a long time ago, its been 14 years since we started working with the TV station in the mountainous region of Banat, and you passed on to us a part of your professionalism, reliability and involvement. Thank you for that !

Among the newest collaborators is Nasul TV, The Godfather, which receives content from Alfa Omega TV as of 2018.

Dear friends, 25 years is youth, strength, its not a long time if you were to ask a young lady or a young man on the street, but its a dogs age when it comes to mass media. Its wisdom, millions of satisfied viewers.

This projects development was determined, among other things, by the impact Alfa Omega TV programs have among viewers. Our desire is to continue working together, to continue our collaboration because viewers want to continue watching successful programs, such as those youve provided us during the 25 years. We thank you for all that youve done for us, for the long-term collaboration and we hope that our partnership will go on this year.

Im glad to say that we no longer consider them our collaborators, but were almost friends. Weve been collaborating for a long time with many of them. Theyre satisfied with our programs, as they received good feedback from their viewers. Were glad to share with them everything we have. In this respect, we can mention the Superbook project.

We wanted to share this project with other TV stations and were glad of its success. We would be happy if more televisions, directors and TV stations owners would understand how important this message is. Its not necessarily religious, but its Christian, and such programs, free of violence, sex, horror scenes and so on, could lead to a nations breakthrough.

The program distributions to local television stations has increased Alfa Omega TV channels ratings by 41% in 2018, compared to the previous measurement. 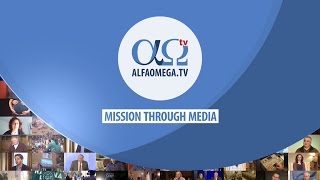